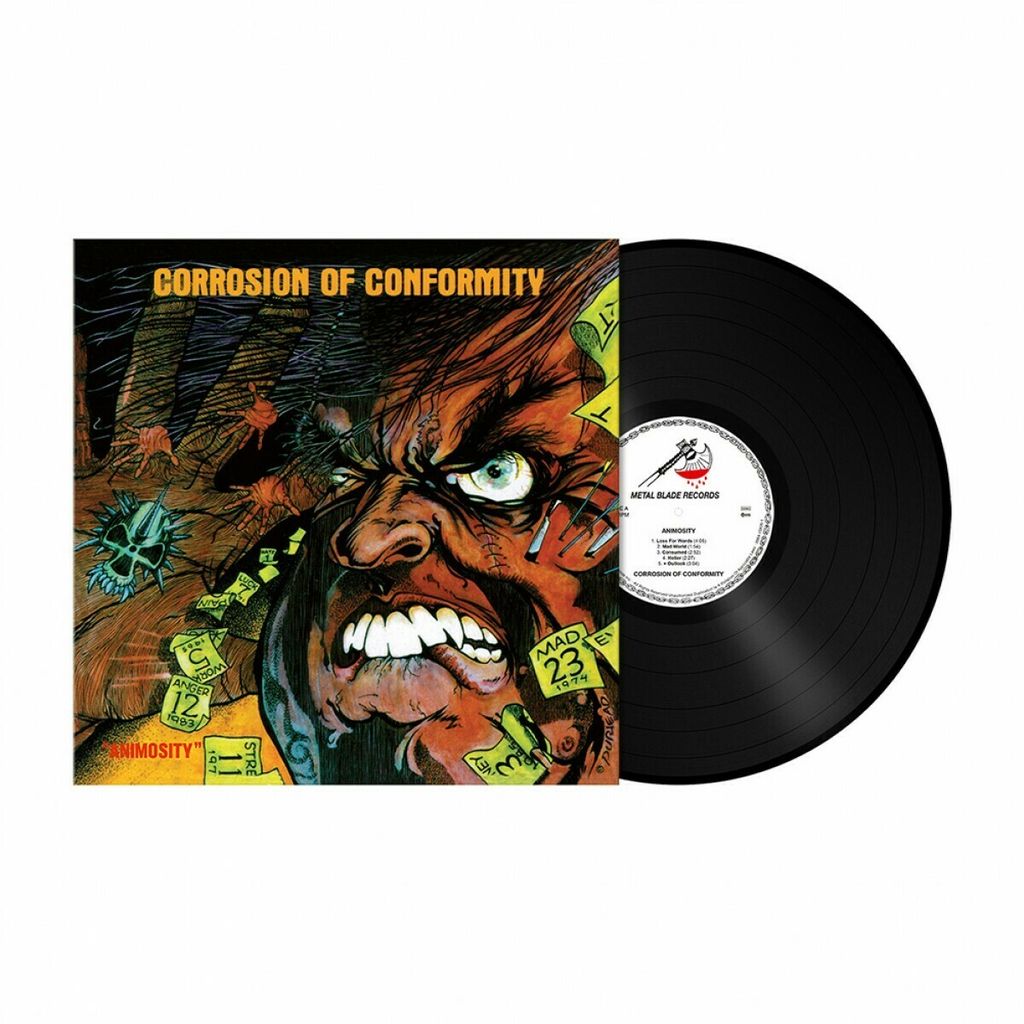 In 1985, any punk band with the temerity to add metal elements to their sound were rather haphazardly lumped into the “crossover” category. Bands as varied as Raw Power, Dr. Know, Broken Bones and, of course, D.R.I.—among others—were at various times shoehorned into the emerging genre, though objectively they shared few stylistic similarities, other than perhaps a penchant for “metallic” guitar and speed. The same could certainly be said of Corrosion of Conformity, particularly with the release of their second album (and first as a trio), Animosity, issued on Metal Blade’s crossover label, Death Records, that same groundbreaking year. While these Raleigh, NC punks had certainly taken a step toward a more metal-influenced sound, made all the more evident by the session with Metal Blade producer Bill Metoyer that constituted the first five songs on the album, stylistically they were radically different than labelmates (and tourmates) D.R.I.

Most crossover hardcore bands of the era were like the punk equivalent of Metallica, Exodus, Anthrax and Slayer—while not necessarily fully embracing the trappings of metal, they found things they liked about it and simply incorporated them into their music. Just as Anthrax weren’t a punk band, they borrowed certain things from that genre all the same. However, this movement was largely a cross-pollination of current bands, a mutual admiration society whereby, say, Slayer and D.R.I. found aspects of each other’s music they liked and integrated them accordingly.

Corrosion of Conformity were different. Though they were aware of (and fans of, to a certain degree) those same groundbreaking early-’80s metal bands, much of what constituted their metal influence came from, well, the first generation of metal, specifically Black Sabbath. C.O.C. not only took (by their own admission) Sabbath’s riffs and sped them up as a basis for some songs, they also incorporated sludgy, doomy breakdowns as wicked and heavy as anything that had emanated from Iommi’s Gibson SG.

C.O.C. basically became a full-on metal band five years later with the reconfigured Blind-era lineup (featuring Pepper Keenan), but Animosity was nonetheless a crucial stylistic lynchpin in the bridge between metal and punk. It irrevocably reshaped crossover’s sonic possibilities going forward—no longer was it simply all about speed—and bands as divergent as Kylesa, Mr. Bungle and even Metallica have picked up on that over the ensuing decades.