All Billionaires Are Bastards by Unsanitary Napkin Place your order before 25th May 2022 All billionaires are parasitic fucking life-suc">
Cart: 0
Cart 0 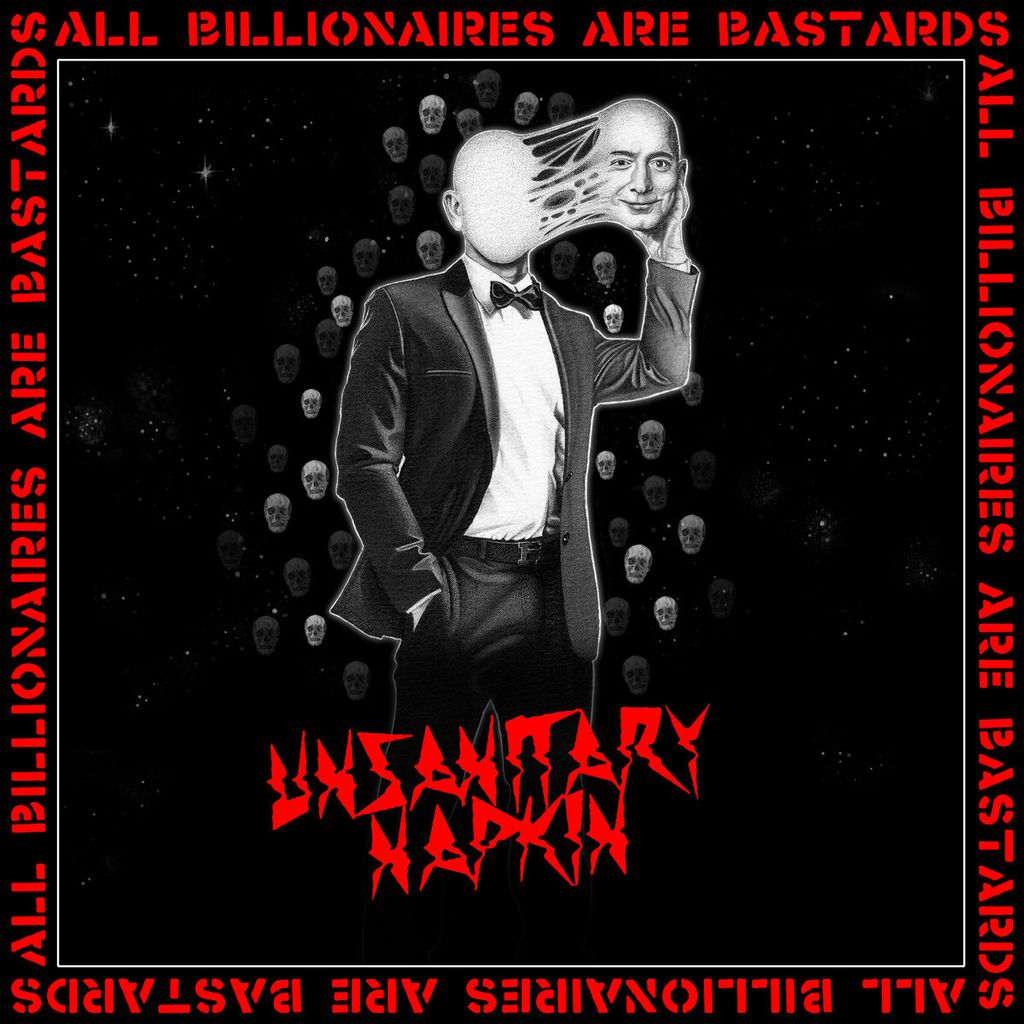 All billionaires are parasitic fucking life-suckers. Whether they’re calling SWAT teams on whistle-blowers, busting unions, keeping their factories open and laying off staff during a global pandemic whilst increasing their wealth by $1 trillion, promoting conspiracy theories and unproven COVID treatments, sending transphobic has-beens to space, or building underground death-trap tunnels for commuters. And the more wealth these vampiric shitlords accrue, the closer they get to fulfilling their oligarchic fantasies.People in Aotearoa are not safe from the malignant power-fantasies of Silicon Valley. Peter Thiel, the billionaire supervillain whose ultimate goal is to live forever, had his New Zealand citizenship fast-tracked in 2017. His company Palantir Technologies – whose data collection software has been used in attempts to spy on progressive journalists and spread disinformation online, who are contracted by I.C.E. to facilitate the deportation of migrants and asylum-seekers from the U.S., and who assisted Cambridge Analytica in bringing Donald Trump to power – has an office on Featherston Street in Te Whanganui-a-Tara.It’s also fitting that Elon Musk recently posted a series of transphobic memes on Twitter, as this album also features TERF War and Speak Up For Women, You Don’t Speak For Me, which were released earlier this year to fundraise for Gender Minorities Aotearoa. In Aotearoa, we have been watching in horror as the state of Texas criminalises gender-affirming care and has called on government agencies and members of the public to report doctors for providing it, and to report the parents of transgender kids and teens to state authorities. This is fascism, led by cruel and sadistic state forces whose aim is to privatise and police sex and gender through anti-trans legislation, banning abortions, and defunding reproductive health. This is an attack on all women, and our struggles are all connected.In Aotearoa, we too have groups, organisations, individuals and politicians who would like to see such violence enacted here. There is simply no other choice for cis people but to stand alongside our queer and transgender communities, and to oppose transphobia every time you see it. Showing up in solidarity with your trans whānau is not a question, but a necessity.There’s plenty of other ground covered across the album: the unending bloodbath that is the meat industry; police violence; the weaponisation of the rhetoric around “freedom” by the alt-right and how it is used by people in power to silence marginalised groups; anxiety around increasing surveillance and data collection measures… the world feels fucked in so many ways, but hopefully this album can help us find solidarity in resistance as we fight for a better world.With love,Unsanitary Napkin
Share 0 Tweet Pin it 0 LINE