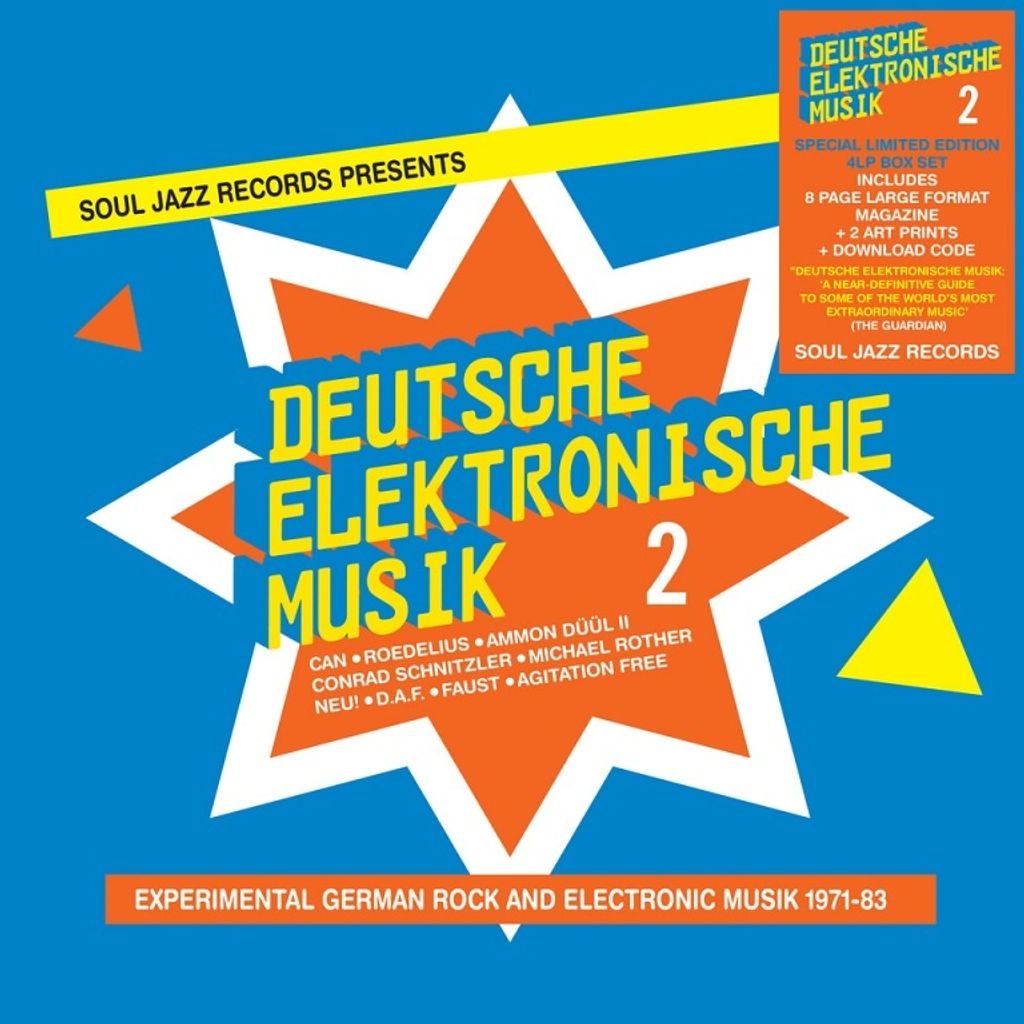 Out-of print since its initial release over 8 years ago and not reissued and it features a monster 2 and a half hours of music!

Includes seminal German groups: Can, Faust, Neu, Amon Duul II as well as a host of lesser known groups and artists such as Agitation Free, Broselmachine, Niagara and many more! And as well as the original pioneers, Deutsche Electronische Musik 2 also features many of the second wave of German electronic artists and groups from the late 70s and early 80s (DAF, Asmus Tietchens, Rolf Trostel) who successfully connected new wave, minimal synth and a European post-punk avant-gardism with the earlier more established Krautrock pioneers who began at the start of the 70s.

The first seeds of German rock and experimental electronic music were planted in 1968, as students and workers in Paris, Prague, Mexico and throughout the world demonstrated against mainstream society, the war in Vietnam, imperialism and bourgeois values. The birth of a counter-culture, drug experimentation and social change expanded musical worlds. Germany experienced its own cultural revolution fuelled by these worldwide student and worker revolts and by a generation’s desire to rid itself of the guilt of war.

Many German youth turning their back on mainstream society. From the opening of the first collective/cooperative in 1967, Commune 1, in Berlin, to the formation of the Baader-Meinhof terrorist group and the bombings, kidnappings and killings of the Revolutionary Armed Forces (RAF), young Germans sought out new values and a lifestyle outside of ‘the system’. These cooperative and communal experiences led to a number of new radical German bands including Amon Duul, Faust and Can.

Many artists and musicians believed a complete rejection of everything musically that had gone before was also necessary in order to build a new identity for German culture. At this time German music meant ‘schlager’ music – insipid pop music that hardly confronted the country’s recent historical events.

Holger Czukay and Irmin Scmidt of Can studied music under the radical avant-garde composer Karheinz Stockhausen and Conrad Schnitzler studied art under the conceptual artist Joseph Beuys. German rock groups were as interested in musique concrète and serial compostion as they were in the psychedelia of Pink Floyd or the rock, soul and jazz music played by resident American forces.

From this beginning German rock music began an evolutionary journey of experimentation. Electronic music became a pathway to notions of space and the cosmos. Conversely, the emergence of communal living led to a number of musicians setting up live/work spaces in rural areas and developing a ‘pastoral’ outlook, with musical ideas engaged closely with nature.

German electronic music, kosmische music, cosmic rock, space music. The objectives were to create new music, ‘free’ from the past. A music that gave seed out of the cultural ‘nothingness’ that young Germans felt as a consequence of Germany’s role in the Second World War. A generation who grew up stifled by the recent history of Nazi atrocities, the guilt of their parents’ generation and their disillusionment at the reintegration of old Nazis into mainstream society.